In 1782, Paul Revere "cut" a seal for the Trustees of Phillips Academy, Andover. The Phillips Exeter Academy seal, presented to the Trustees in 1784 and used by the Academy until 1952, is an adaptation of the Andover seal. What follows is the generally accepted interpretation of the elements of the seal.

"FINIS ORIGINE PENDET": The Academy motto is a quotation taken out of context from the Astronomica of Manuilius. As a school motto, it is freely translated as "The end depends upon the beginning."

"CHARITI THEOU": The Greek letters at the top of the seal mean "by the grace of God." It is believed the phrase indicates John Phillips' desire that religion be a deep concern of the school.

"NON SIBI": Across the sun, symbolizing the rising sun over the sea of knowledge, is "Non Sibi," or "Not for Oneself," testifying to the philosophy at Exeter that the wisdom gained here should be used for others as well as for oneself.

BEES AND TREES: The beehive, with adjacent flowering plant and bees flitting between the two, symbolizes a group of industrious scholars.

The pine trees symbolize New England and the oak the tree of strength. The trees call to mind the adage, "Great oaks from little acorns grow."

In 1952, Charles R. Capon, famous designer of bookplates, was commissioned to design a new seal for the Academy, simplifying the older seal, yet conveying the same good advice.  Below left is the seal before 1952, and below right is the seal after 1952. 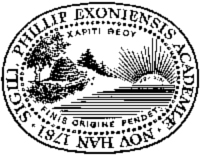 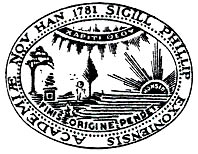 The origin of the use of the lion as a symbol for Exeter is not entirely clear. The lion we use was certainly taken from a bookplate designed for John Phillips in 1775 by Nathaniel Hurd, a famous seal-cutter and die-engraver in Boston. The Phillips Family crest is prominently figured in the plate. It is not clear if this plate became the property of the Academy before the death of its owner, but at some point, the name of John Phillips was removed from the plate and the inscription "In usum Academia Phillipsiae Exoniensis" ("for the use of Phillips Exeter Academy") was put in its place, and the motto "Pia mente Studeatur" ("Let studies find a reverent mind") was added at the top. This bookplate was used by the Academy Library at least as early as 1905 and then later updated to the plate we currently use.

Some of our published histories suggest that the lion, as a symbol for the school, "emerged conspicuously'' at the Sesquicentennial in 1931. Yet Amen Hall, built in 1925, displays the lion from the Phillips Family crest, and there is a lion on the flagpole above its cupola. The above mentioned bookplate, without the inscription, was used for the first time by a student organization on the cover of the April 1915 issue of The Phillips Exeter Monthly, a student literary magazine. It is not clear exactly when the school began using the more simplified lion rampant (shown here).

The elements that make up any family crest have for a long time been very closely prescribed by the rules of heraldry. Our lion, a lion rampant, must be depicted in profile, standing on the left back paw. The head, trunk, and the left back paw fall in line. The left front paw is horizontal, the right front and the right back paw are placed diagonally upwards. The tail is thicker in the middle, with a bunch of flame-like hair and is turned down toward the body. In recent years, the Exeter lion has sometimes been confused with a griffin. A griffin has the head of a bird and talons instead of front paws. Sometimes a griffin is shown with wings. Our symbol is certainly a lion rampant.

Some of Exeter's mottos have been permanently and publicly displayed as inscriptions that are carved into building facades. When the current Academy Building was dedicated in 1914, a Latin inscription was added over the main doorway: "HUC VENITE PUERI UT VIRI SITIS" ("Come hither, boys, that ye may become men"). On April 16, 1996, honoring the first quarter century of coeducation, a new inscription was added to the front facade of the Academy Building: "HIC QUAERITE PUERI PUELLAEQUE VIRTUTEM ET SCIENTIAM" ("Here, boys and girls, seek goodness and knowledge"). At the same time, the dates 1781-1970 are added to the inscription on the lintel over the front entrance, marking the end of single-gender education at Exeter. Girls entered the Academy in the fall of 1970. The first Exeter class with female graduates was the Class of 1971.  The inscription over the doorway of the Thompson Gymnasium is:  KATA SKOPON DIOKO (translation:  “I press onward toward the goal”).

“Exeter: An Education Like No Other” has been used as an expression to define Exeter since 1999, taken from a report on strengthening the Academy’s external communication done by Jan Krukowski & Company.