John Phillips, Founder of the Academy

John Phillips, Founder of the Academy 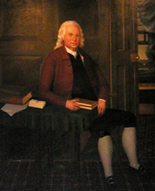 John Phillips was born in 1719, the second son of Rev. Samuel and Hannah Phillips, of Andover, Massachusetts. His great-great-grandfather, Rev. George Phillips, had come from England to Massachusetts to seek religious freedom, and served as minister at Watertown, Massachusetts.

Prepared for college by his father, John entered Harvard at age 11, the youngest in his class by two years. Not quite as serious as his older brother Samuel who had attended Harvard before him, John displayed a bit of his “spirit” when as a freshman, he wrote a note to his tutor, on the flyleaf of his textbook, inviting the tutor to “step up to his chamber for a glass of ale.” At Harvard he won prizes and was chosen to deliver the Salutatory Oration at his commencement in 1735.

He returned to Harvard for a master’s degree, which he obtained in 1738. After preaching in Andover for a couple of years, he moved to Exeter (the birthplace of his grandmother) and started teaching and occasionally preaching. He soon began to assist the widow of his cousin Nathaniel Gilman, a merchant in town, who had died in 1741.

While working for Mrs. Gilman he briefly courted her daughter Tabitha, who was around his age. After she refused his marriage proposal, he courted and married her mother, Mrs. Sarah Gilman, in 1743. She was 16 years his senior. From then on, he developed the business that his cousin had started and engaged successively in general merchandise, export and import trade, real estate, and banking.

By 1765, the year of his wife’s death, he was the richest man in Exeter. He married his second wife, Elizabeth (Dennett) Hale, widow of Dr. Eliphalet Hale of Exeter, in 1767.

During his many years as a successful business man, he found the time to serve the town, the province, and his church as auditor of town accounts, selectman, tithing man, surveyor of highways, overseer of the poor, fire warden, deputy to the First Provincial Congress, member of the General Assembly, judge of the Court of Common Pleas, and member of the Provincial Council. He clearly felt strongly about what we would now call community service.

John Phillips was an active member of his church. He was one of the original founders of the Second Parish in Exeter, as it was called, when a group of worshipers separated from the First Church. He served the church for 40 years as clerk, moderator and ruling elder.

In addition to his work as a teacher when he first arrived in Exeter, John Phillips demonstrated his belief in the importance of education in many instances. As early as 1762 he sent a gift to Eleazar Wheelock to help support Wheelock’s “School for Indians” in Lebanon, Connecticut. That school later moved to New Hampshire and became Dartmouth College. John Phillips was the school’s first major benefactor. He was a trustee of the college from 1773 to 1793. Dartmouth named their first professorship after him.

Founding of Andover and Exeter Academies

John, his older brother Samuel, and a younger brother, William, had all married wealthy widows, expanded their husbands’ businesses (which they took over, according to the custom of the day), and as they neared retirement, were eager and financially capable of doing great things.

By 1775, young Samuel and Eliphalet Pearson were in business together in Andover, making gunpowder for the Revolutionary Cause. Young Samuel had become increasingly alarmed about the steady decline in the educational system in this time of such turmoil in the country. He believed that only a good educational system could ensure a successful future for the Colonies.

In 1776, these two young men approached young Samuel’s father (John’s brother), and the two uncles, John and William, with the idea of opening a school in Andover.

The Deed of Gift, providing the financial backing and guiding principles for Phillips Academy in Andover, was signed on April 21, 1778. The school opened (with one teacher, Eliphalet Pearson, and 13 students) on April 30 1778, although their Act of Incorporation was not passed by the Massachusetts legislature until Oct. 4, 1780.

John Phillips was so pleased with the success of their school in Andover that, in a short time, he wrote to his nephew and asked what he thought of his uncle John creating a school in Exeter on his own. The nephew encouraged his uncle to move forward and agreed that the constitution and seal of Andover could easily be adapted to suit his uncle’s new school in Exeter.

The Act of Incorporation for the Exeter Academy, which both John and Elizabeth Phillips signed, is dated April 3, 1781 (only six months after the formal incorporation of Phillips Academy in Andover). The Deed of Gift is signed May 17, 1781. But it took two more years for John Phillips to obtain a building, and find a teacher. Phillips Exeter Academy formally opened on May 1, 1783 with one teacher and 56 students.

Born Dec. 27. Son of Rev. Samuel Phillips of Andover and Hannah White (who is the daughter of Lydia Gilman, sister of Maj. Nicholas Gilman of Exeter). John is the second of three sons: Samuel, John, and William.

Graduates from Harvard at age 15, the youngest in his class.

Reads medicine or theology at home in Andover.

Moves to Exeter. Tradition has it that he keeps a Latin school.
Name appears on tax records in Exeter for the first time.

Teaches in town school. Clerk in certain legal matters.
Witnesses will of Nathaniel Gilman, March 15th. Gilman dies in June.
Enters employment of the widow Sarah Gilman as a clerk.

Begins life of trade by suing Daniel Ladd of Brentwood.
Proposes to Tabitha Gilman (daughter of the widow Sarah Gilman) and is rejected.

Called to preach by Second Church, May 25th. Refuses “because of delicacy of my lungs.” However, he serves the church as clerk, moderator and ruling elder.

Oct., appears before provincial church council to ask for the recognition of Second Church.

Made Justice of the Peace.

Sits on Court of Common Pleas.
Makes gift of £175 to Dartmouth at commencement.

Elected to the Board of Trustees, Dartmouth.

Receives LLD from Dartmouth.
Invests in land with all currency that comes his way and accumulates vast areas of land, most later to be deeded to Dartmouth.
Pledges £1,606 to Andover.

Although neutral in Revolution, chosen moderator for Exeter town meetings.

Dartmouth names first professorship, the Phillips Professorship of Divinity, in his honor.

Resigns trusteeship at Dartmouth due to failing health.
Portrait painted by Joseph Steward.