Magazines: Articles in magazines are usually short in length and are written in a popular style.  An example of a magazine that has articles on economics is The Economist.

Journals:  Articles in journals are usually lengthy and are written by scholars and experts in the field.

They often have bibliographies and extensive footnotes (which can provide leads to other sources).

Examples of journals that have articles on economics are American Economic Review and Journal of Economic Literature.

Ameri, Amir H. "On the Logic of Encampment." Issues in Architecture, Art
and Design vol. 4, no. 2 (1995): 118-152.
Explores the link between formal and spatial properties of libraries as a
building type from the Middle Ages to the present. The Academy Library is
featured in the article. A copy of the article can be found on the author's website
http://ahameri.com/cv/ under Research & Publication.

Armstrong, Rodney. "New Look Library at Phillips Exeter Academy."
Library Scene 2 (Summer 1973): 23-25.
Written by the Librarian after a year's occupation of the Library, this article
describes the concepts considered in the planning and how they were
realized in the design. The cover has a color photograph of the building.

Betsky, Aaron. "Heart vs. Head: In architecture we trust, all others bring data."
Architect (February 2011): 68.
Is architecture art or science?

Clark, Roger H., Michael Pause, and twenty students of the School of
Design. "Analysis of Precedent: an Investigation of Elements,
Relationships, and Ordering Ideas in the Work of Eight Architects."
The Student Publication of the School of Design, North Carolina
State University at Raleigh, 1979.
Compares elements of various works, including the Academy Library,
by eight architects. Diagrams. 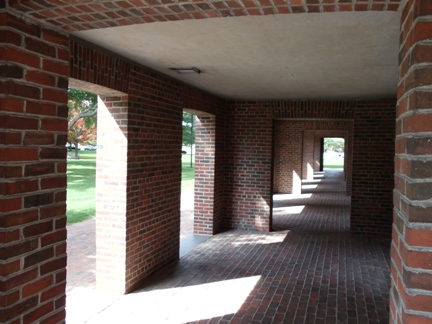