Russell, James S., "The Richness of Louis Kahn's Library Stands the Test of
Time." Architectural Record, May 1997: 94-96.
The Academy Library wins the prestigious 25-year award of the
American Institute of Architects. Photographs.

Shenker, Israel. "Kahn Defines Aim of Exeter Design." The New York
Times 23 October 1972: 40.
An interview with the architect who speaks of his principles of architecture,
the Library and other buildings.

Wickersham, Jay. "The Making of Exeter Library." Harvard Architecture
Review 7 (1989): 138-149.
A thorough article on the design and construction of the Library by an
alumnus of the Academy. Illustrations, plans, sections.

Wiseman, Carter. "Stern vs Kahn in Preppieland." The New Criterion 10
(March 1992): 62-4.
A comparison of the architecture of two libraries; St Paul's School, Concord, NH
and Phillips Exeter Academy, with PEA library being described favorably as
a "timeless masterpiece." 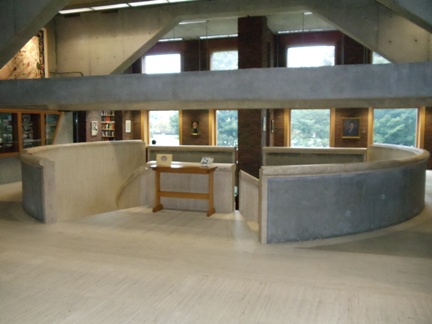