LeCuyer, Annette. "Evaluation: Kahn's Powerful Presence at Exeter."
Architecture 74 (February 1985): 74-79.
The Library and dining hall are described in terms of their functioning
in the Exeter setting; ". . . a timeless vision — at once classical and
contemporary — of institutions that form the very foundation of human
culture." Photographs, plan.

Marlin, William. "Within the Folds of Construction." The Architectural Forum
139 (October 1973): 26-35.
Discussion on the theme: "Louis Kahn's work at Exeter Academy
evinces an on-going search for the essential elements of architecture."
Photographs.

Mattern, Shannon. "Geometries of Reading, Light of Learning: Louis I. Kahn's
Library at Phillips Exeter." Nexus Network Journal 12, 3 (2010): 389-420.
Examines how the geometric forms of the library shape patrons'
relationships to media in the collection.

"The Mind of Louis Kahn." The Architectural Forum 137 (July/August
1972): 76-77.
After a brief description there is a statement by Kahn about his
intent and thinking behind the design of the Library. Photographs,
plan, elevation. 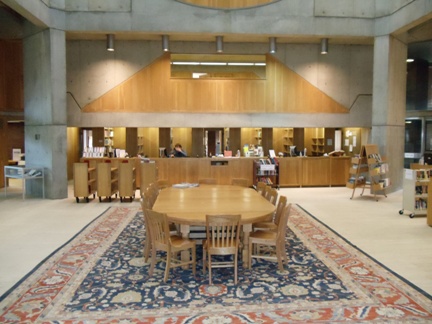