The Deed of Gift

Among the many historical texts held in the Academy Archives, the most famous is the Deed of Gift — the document, dated May 17, 1781, by which John and Elizabeth Phillips gave the assets that formed Phillips Exeter Academy. While written more than 200 years ago, it is still very much the foundation of the school. Every year at the assembly that opens the academic year, the principal of the Academy speaks about some aspect of the Deed of Gift.

An early passage states that the Academy should teach its students "not only in the English and Latin grammar, writing, arithmetic, and those sciences wherein they are commonly taught, but more especially to learn them the great end and real business of living."

Its most famous phrase, “goodness without knowledge is weak and feeble, yet knowledge without goodness is dangerous,” is quoted frequently.

"The Academy shall ever be equally open," the Deed proclaims, "to youth of requisite qualification from every quarter." Though perhaps not what John Phillips intended, this phrase has led to the inclusive spirit of the Academy—its cultural, racial and socioeconomic diversity, and the democratic spirit that seems to be born anew each fall at the Harkness table and that influences everything we do here.

In 1931, thanks to a generous gift from philanthropist Edward Harkness, Phillips Exeter Academy embarked upon an educational experiment that would transform almost every aspect of school life and influence secondary school education throughout the country.

On April 9, 1930 Harkness met with Exeter representatives in New York. During this meeting, Harkness laid out his vision for a completely new teaching method at Exeter, one which is still used to this day. In a memo that records that famous meeting, Harkness (referred to as “Mr. Jones” to protect his identity prior to the official announcement of the gift) said in part:

"You are thinking of improving an existing institution by building on what you have got now. I am thinking of something much more radical than that ...I want to see somebody try teaching - not by recitations in a formal recitation room where the teacher is on a platform raised above the pupils and there is a class of twenty or more boys who recite lessons.  That is what I am trying to get rid of.... What I have in mind is teaching boys in sections of about eight in a section, not in a formal recitation room, where there would be ... a raised platform with an instructor behind a desk, but where eight boys could sit around a table with a teacher who would talk with them and instruct them by a sort of tutorial or conference-method, where the average, or below-average boy would feel encouraged to speak up, present his difficulties, and the teacher would know... what his difficulties were." 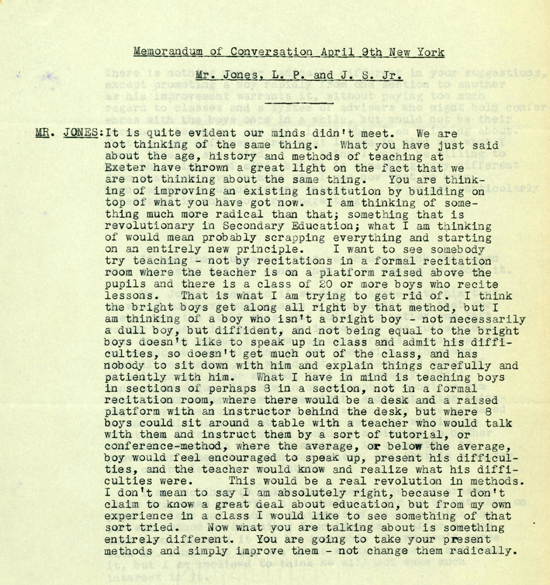